The Real Costs of Insufficient Testing

When deciding on the proper test process, manufacturers generally consider the tradeoff between cost and quality. The price of test equipment is one of the primary factors considered in determining the cost of a test system, but often neglected is thinking through the real costs of having an insufficient test system.

Defects introduced in the manufacturing process will always cost time and money. The size of that cost, however, depends largely on when in the process the defects are discovered. The cost of a defect rises exponentially the later in the process it is discovered. Defects found immediately after they are caused are easy to fix while defects found by the end user of a product can be very costly to the company.

This principle is easy to examine in the world of electrical testing. We can break down the costs associated with finding and fixing a defect at various stages of the manufacturing process. Consider the example of an operator swapping two pins in a connector on a moderately complex harness assembly. For each stage we’ll break down what steps must be taken to fix the defect if it was not detected until that stage. 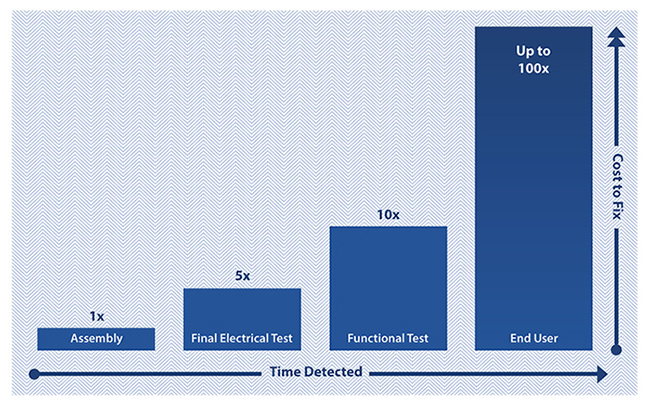 If the operator knows immediately that they have put the pin into the wrong cavity the fix only takes a few seconds to move it to the correct cavity. Automated test equipment can be used at individual build stations to check for errors as the harness is built and ensure operators catch mistakes. Errors reported by the tester are easy to diagnose because the last action the operator took must have been the cause of the error. A fix at this stage costs almost nothing.

Errors in a final test can take more time to diagnose because any of the finished connections could be the source of the error. If you are using good automated test equipment you should be able to quickly identify the defect that caused a test error.  If not, it may take more effort to understand the real problem. Often times once the defect is identified the harness must be transported from the test area back to an operator. The defect has to be described to the operator so they know how to fix it. If the harness was fully complete then the operator may have to cut through braiding or tubing and scrap some material to get to the connector to fix the problem. Then after fixing the problem the operator will have to redo the work that was done previously to put the harness back together, transport it back to the test area, and have the test operator perform the final test again. All of those steps can add up to significant time and material costs that are not included in the production schedule or bill of materials.

If the harness defect is not caught until it is installed into the end product the diagnostic time can go up even further. Often the harness is just one of many pieces in a system that could be causing the problem. Determining the source of a functional test failure can be an extensive and expensive process. Once the harness is identified as the cause of the problem it will have to be removed from the product and then the specific defect may have to be diagnosed separately. All of the work from the Final Test stage explained above will have to be performed to fix the defect and then the harness will have to be reinstalled into the product and the functional test performed again. The time spent in these efforts can add significant costs, but often the worst case scenario at this stage is if the nature of the defect damages the product. One example is of a company that makes high end gyroscopic cameras for search and rescue operations. While performing a functional test on their product, two swapped wires caused the camera to burn up, costing tens of thousands of dollars.

The most costly scenario is to have the defect found by the end user of the product. Depending on the product, you may have to pay for the product to be returned to you, or pay to send someone out to inspect the product. One company that makes a product for the trucking industry frequently spends over $1,500 simply to get a technician out to diagnose a problem in the truck. A much larger cost, however, could occur if the defect causes you to lose credibility in the eyes of your customer, or even the industry. One extreme example is a cable shop that was involved in an automotive recall due to a faulty cable they produced. This cost them over $1,000,000 in immediate costs and an unknown amount of lost future revenue due to decreased reputation.

What is your cost?

The real cost of a defect for your company will depend on a number of factors, but taking the time to figure out this information can be extremely valuable. Once you understand what a defect may cost you if found at each stage of the process, making a decision on how to implement your test process should be much easier. As an example, one company building a complex product determined that a certain type of defect discovered in the functional test stage cost them $15,000. This type of defect occurred, on average, once a month.  So the cost of missing this defect earlier in the process was $15,000 / defect x 12 defects / year = $180,000 / year. Thus any investment less than $180,000 in equipment or process improvements that could detect this error earlier would be saving money in the long run. The numbers will be different for your company but the principle is the same – knowing the numbers will allow you to know how much you should invest in improving your process. And chances are that simple process changes, like performing an extra test a step earlier in the assembly process, can yield significant savings with relatively little cost.

If you want to be confident you are utilizing the right test process, take the time to determine if there are potential costs you may be overlooking. For electrical testing, Cirris Systems offers a free tool to help determine the cost of defects at www.cirris.com/realcost. This information will allow you to consider not just the costs of setting up an appropriate test system, but also the costs of failing to do so.

Complete our Cost of Defects worksheet to determine how much you could save by finding defects earlier.