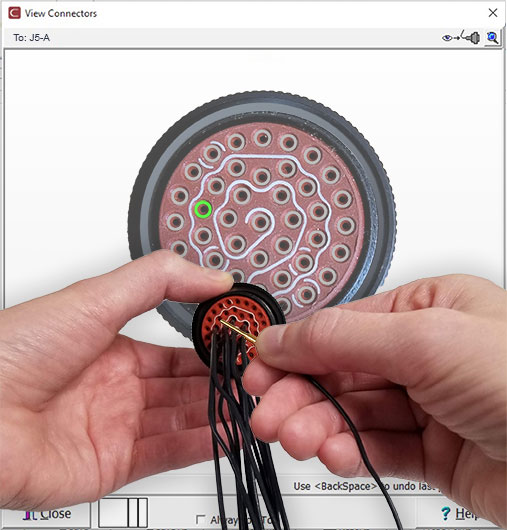 Once first-end pinning of a harness connector is complete, the wires need to be routed to one or more “second-end” connectors. If the product connectors are back-wired through mating fixturing to a CR or CH2 tester, the assembly process can be monitored to immediately identify any pinning errors as they occur. In addition, the tester can provide the operator with graphical, written, and audible assembly prompts to complete second end pinning.  Once the assembly process is completed with low voltage testing, a hipot tester can additionally perform high voltage tests.

In a random second-end pinning, operators touch the probe to any wire end. The tester responds by displaying the associated image of the FROM and TO connectors and highlights the termination positions. As the second-end pin is inserted, the tester audibly and visually either confirms good connections or informs the operator if the pin is placed incorrectly.

In sequential second-end pinning, the tester requires the operator to pin connectors in a defined sequence. The tester can display the FROM and TO connector images, wire label, wire color, and pin references for the active instruction. The operator uses the probe and audible signals from the tester to identify the wire associated with the active instruction. As in the random mode, the tester audibly and visually either confirms good connections or informs the operator if the pin is placed incorrectly.

To streamline the second-end pinning process when using a CR tester, the operator can use his or her fingers, rather than the probe itself, to probe wire ends. This is accomplished by the operator wearing a wrist strap connected back to the tester, or by using a heal strap in conjunction with an isolated floor grounding mat that is connected back to the tester.  Freeing the operator’s hands from holding the probe, allows the operator to use both hands freely to perform the assembly process, further speeding the assembly process.