Can I use High Current to test for Broken Strands?

We have presented empirical and theoretical data regarding testing for broken strands in wiring harnesses using standard resistance-based continuity testing. The conclusion was, sadly, not very encouraging. Now we explore the question: "Why not turn up the current? Surely, if strands are missing, then higher current will 'burn out' the remaining strands?" 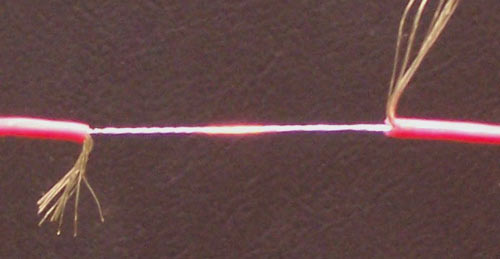 Test This! - The Empirical Results

Why didn't the single strand burn out? The answer is thermal conductivity. When the cut wires were stripped back 0.75 inches, the remaining wires got hot. The fewer wires there were the hotter they got, even to the point of burning out. But when the cut wires were only stripped back 0.1 inch, the remaining wire didn't get hot enough to burn out, even after 30 minutes of exposure to 10 amps of constant current. The thermal conductivity of the remaining wires dissipated the heat so effectively that not even a single strand burned out.

Again, it is evident that trying to "burn out" remaining strands with high current is not practical since you have no control over how close broken strands are to unbroken strands in a real-world application.

Borrowing an approach from the popular TV show Mythbusters, we set out to prove or debunk two common myths relevant to using high current for testing connections.

A quick review of Ohm's law:

Resistance, any kind of resistance, exists when one force opposes, or impedes, the progression of another force. In an electric circuit, resistance is the force that opposes the flow of electrons.

Resistance and current are two of the three fundamental properties of an electric circuit. The other property is voltage. The general unit of measure for voltage is VOLTS and may be represented with the letter E (for electromotive force). Voltage and current are related to each other through resistance.

It is most important that three facts come across here:

1. Ohm's law defines the interrelationship of current to voltage to resistance.
2. The expression of a conductor's ability to carry current is resistance.
3. The result of current through resistance is voltage.

In a cable or harness (or in any wired electrical interconnection for that matter), we are providing connected pathways for the flow of electric current. A specific amount of resistance in each pathway, or circuit, is one definition of the circuit's quality.

In testing the quality of a connection to the circuit, we start with a known amount of current and send it through the connection to a lower potential (ground). Next, we measure the voltage across the connections and apply Ohms law that states the resistance is equal to the voltage divided by the current. In the test:

For example, take a current of 0.5 amps and push it through a connection. Now connect the voltmeter leads to either side of the connection. The voltmeter displays 10 volts. What is the resistance?

Suppose we were to take 20 times the original current and apply it to the same connection. Since the resistance does not change, we will see the effect of increased current in the measured voltage, which is now at 200 volts, using ohms law:

Conclusion: The resistance we are measuring is independent of the applied current. Higher current or lower current, the resistance is the same. So, for finding bad connections the myth that if some current is good, then more current is better is false.

Myth #2. For finding broken strands in wiring: If I apply more current, I can burn out the section of cable containing the broken strand!

You may observe from our explanation above that there must be some effect of applying more current to the connection. Indeed there is: power.

Power is the force that does work, work such as lighting an incandescent lamp, or spinning an electric motor, or moving a train car from here to there. In our connection, there is no work to be done so the power will expend itself as heat. Heat increases in the device under test as power is applied. The exact amount of heat increase depends on how much power and how long the power is applied.

Broken strands of wire in a cable that is made of multiple strands means that the volume of wire that the current must pass through has been reduced by that number of broken strands. So, to find any truth to myth #2, we can break strands in a wire, apply high current and see what happens.

The amount of heat increase in the wire depends on how much heat is lost to the air or through thermal conductivity. Where the remaining wires were exposed over 0.75 inches, the only heat lost was into the air. When the build up of heat exceeded the loss of heat into the air such that the fuse point of the wire was reached, it melted. The cut strands were too far away to conduct any heat and so, with nowhere to go but into the air, the heat built up until it burned out the wire.

In the case where a single remaining wire was exposed over only 0.1 inch, the heat was transferred to the nearby cut strands so effectively that, after 30 minutes, the wire had still not burned out. The cut strands were so close to the single remaining strand that the heat was lost through thermal conductivity. The surrounding wires act as a big heat sink, dissipating more of the heat than the single strand did, thus keeping it from burning out.

We've created a calculator based on the Preece and Onderdonk equations to give you an idea of the "free air fusing" effects of burn out times for given AWG wires and remaining strands. Click HERE to access the calculator.

Just how big a factor is Thermal Conductivity to burn out?

Imagine what would happen to a hair dryer if the fan were stalled out. The air current provided by the fan is designed to carry away heat through thermal conductivity. Without the air current the heating elements would burn themselves out.

An appliance like a hair dryer would be more of a fire hazard if the designers did not include a fuse in the heater circuit. The fuse is designed to burn out at a temperature that is much lower than the temperature that would ignite the plastic housing of the dryer. The air current from the fan removes just enough heat to keep the fuse from burning out.

In our samples that did burn out, the first effect of heating was a change in the chemical composition of the wire. The wires smoked and became brittle long before they burned through. Without a way to continuously monitor the temperature of the entire surface of the assembly this chemical alteration of the conductors will go undetected and a bad situation is made much worse.

In our experiments the area near the exposed strands was free of combustible material in order to manage the fire hazard that uncontrolled heating of wires can present.

A power supply that is capable of delivering the amount of current and voltage required to melt copper wire can be dangerous, if not lethal, in an environment where the results of its application are so unpredictable.

Conclusion: Yes, high current can burn through the remaining section of a cable with broken strands. Is it a reasonable process to bring to manufacturing? No.