Testing has come a long way since the days when the only option for testing wires was checking continuity with a handheld meter. Harnesses that used to take hours to test can now be analyzed in seconds. High voltage testing can find errors that might go unnoticed otherwise. Even four-wire Kelvin testing is easier than ever. 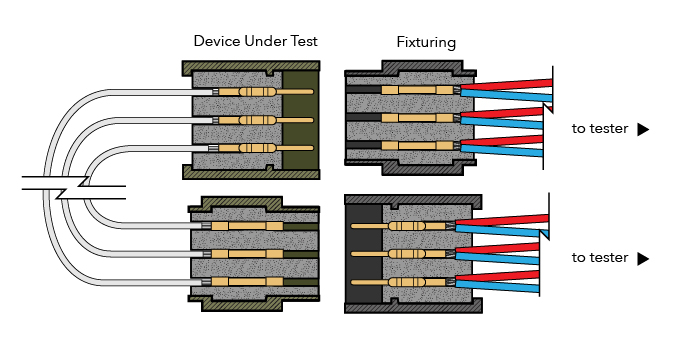 Four-wire testing can measure the device-under-test (DUT) without measuring the fixturing. While normal testing has one wire connected to each end of the cable, each wire sending a current and recording the result, four-wire has two wires for each side of the cable. That means that for each end of the cable, one wire sends a current and a different wire measures the result. The wire that measures the result can be connected directly to the DUT, eliminating the extra resistance in the fixturing.

Setting up a four-wire kelvin test is not difficult when using Cirris equipment. Cirris has four-wire capabilities programmed into the software. Building the fixturing is a matter of knowing which pins will send the current and which will measure the resistance. Cirris has several resources to help with this. See this more in-depth article, your tester’s manual, your Cirris representative, or search for 4-wire on cirris.com.