Other Cirris articles have warned of threats like humidity, flux residue, and metal whiskers. Now we’ll warn you of another danger to your wires. Red Plague might sound like an ancient event from the Bible, but it is a threat in wire assemblies today.

What is Red Plague? 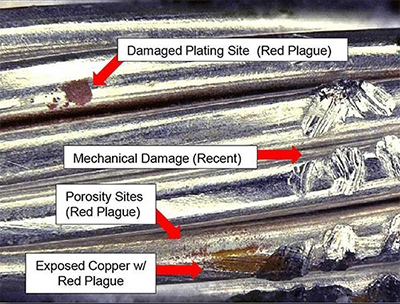 Red Plague, or cupros oxide, is the name given to the corrosion effect found in silver plated copper wire. Most often it is seen as spots of brown or red on the silver plating.

Researchers are still working toward finding a cause and solution for Red Plague. So far they have determined certain factors that contribute to the problem.

Some of these factors can be prevented through care and diligence.

Who is affected by Red Plague?

The humid and demanding environment of the aerospace industry cables means Red Plague is common in this area. But other industries are not safe from the threat. Documents dating back over fifty years come from military, aerospace, and other industries. Anyone who uses silver plated copper wire is at risk of Red Plague. Watch for red and brown spots on your silver plated copper wire.

You may be asking why silver plated copper wire is used at all when it is so prone to Red Plague. This type of wire has proven to be a good conductor and easy to manipulate. It is also immune to metal whiskers. But mostly it has a history of being useful in the aerospace industry in both the US and Europe.

What is the solution?

NASA has built a list of preventative actions to stop the spread of Red Plague. The list mostly consists of keeping equipment in a clean environment with low humidity. You can read the full list here.

What can Cirris do to help?

Cirris products cannot detect the presence of Red Plague, but we can help you identify factors that might contribute to the problem. For example, we have an article that teaches how to manage humid testing conditions. As discussed above, humidity is one of the biggest causes of copper corrosion. We also have an article on dealing with flux residue which can cause problems in wires when not used properly. Chemical contaminates such as flux are another reason Red Plague spreads.

Read these articles and more in our learning-center.

Some of the references and stories used to write this article were recommended by LinkedIn users. We thank all those who contributed. Follow Cirris on LinkedIn for opportunities to contribute to future articles.